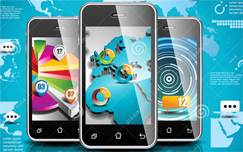 The driving forces behind these astounding adoption rates are consumers, who now feel the need to be constantly connected to the rest of the world and are trading in their old flip phones for new smartphones. At the same time, there is also a huge influx of younger consumers, who can now afford smartphones, thanks to the presence of less expensive options available in the market.

Based on the above astonishing stats, and in order to meet the consumers’ needs business and firm should highly considering of mobile applications development & solutions to their products and services.